The “Interactive” badge is awarded to books that offer an exceptional interactive experience. 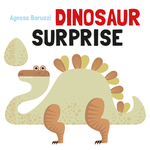 In Baruzzi’s accordion style lift-the-flap board book, each page initially shows a tiny animal—like a butterfly, turtle, or jellyfish—with an accompanying line of introductory text. For example, paired with a tiny green snake is “Look out, little snake!” But once a reader unfolds the page (a nice variation on the more common flaps-that-flip-open interaction), the full illustration of what looked to be a snake exposes the middle body of a dinosaur: initially hidden by the flaps, there’s actually “a huge Kronosaurus in the water.” This delightful and unique take on the subject of dinosaurs is exciting in it’s reveal from little animal to dinosaur. The surprise found on each page—like that of “You could pet this hedgehog . . . but you wouldn’t want to pet this Parasaurolophus”—piques curiosity, especially with the discovery of less familiar dinosaurs included in this read. The illustrations are playful and simplified, rather than realistic, with basic, bold colors highlighted on each page. Some additional information on the dinosaurs included in the book could have added a fun touch and a deeper dive, but this primer is sure to be a hit for dinosaur lovers and novices alike. 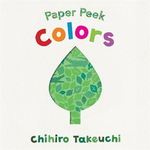 This clever color book presents a series of colors, each in two steps. The first page features a two word color-object combination (such as red apple) and a simple cut out of the shape acting as a window through to the exceptional cut paper collage behind. The second spread gives young readers five different elements to look for in the collage, in increasing quantities from one to five paired with the collage itself. While color books are an age old concept, Takeuchi’s elevated execution is a breath of fresh air. The way each collage features only elements that are characteristically the selected color, and fully embraces a single color at a time eliminates confusion for little readers intent on grasping their color concepts, while also providing variety and ample familiar examples. Its versatility extends to the ease with which the book can be adjusted to fit the broad interest and ability levels of children in the board book age range, allowing readers to accordion their reading to extend their time and dive deep looking for additional objects not specifically called out on the find-and-seek pages or minimally read only the color-object combinations.

Paper Peek: Colors
Chihiro Takeuchi
Board book
5.3
colors first concepts counting and numbers
Add to list
We use cookies to ensure you get the best experience on our website. By using our site you consent to our use of cookies. Learn more