One of this month's featured creatives is Jo Empson. Jo wrote and illustrated Little Home Bird, which we included in our October picture book box.

Jo is a UK-based author and illustrator, and graduated from Cambridge School of Art with a Master's in Children's Book Illustration. Her first book, Rabbityness, was nomiated for 8 awards including UKLA Book Awards 2013 and Kate Greenaway Medal 2013, and her second book,Never Ever has been awarded a Kirkus Star and was nominated for the Kate Greenaway Medal. 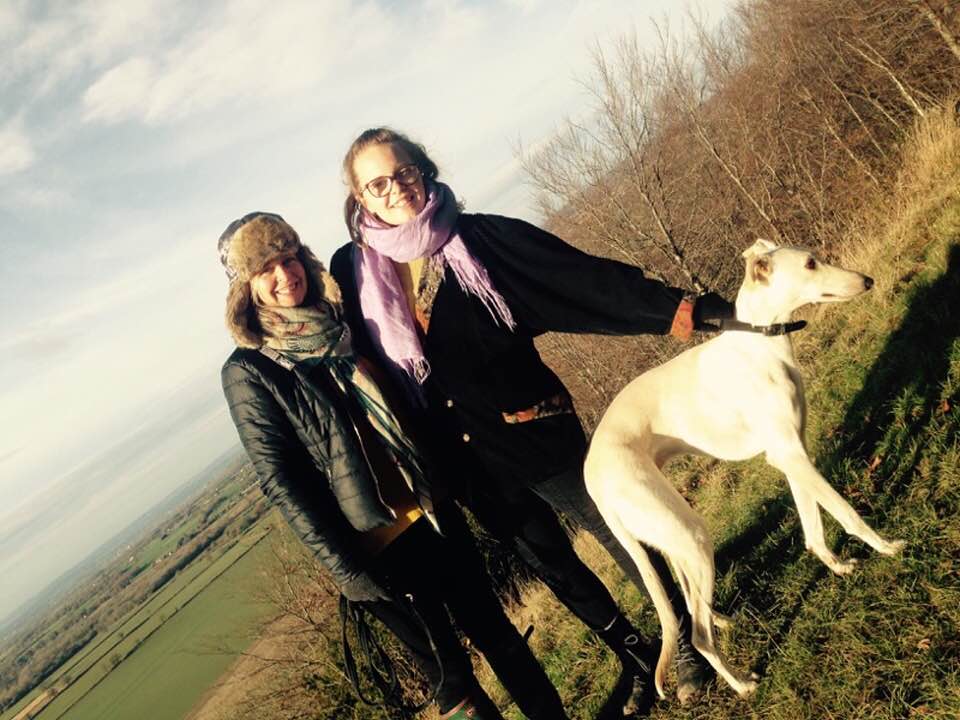 Bookroo: Your first children’s book Rabbityness was published 6 years ago, but before that you were a graphic designer. What inspired you to pivot to become a children’s book author and illustrator? How did you make that transition?

Jo: Since studying graphics at Art College I have always loved illustration and as a graphic designer I would weave elements of illustration into my graphic design projects. When our daughter Sophie was born our house quickly filled with books and reading bedtime stories became a very special part of the day. I fell in love with picture books and the idea of being able to combine storytelling and illustrating seemed the most magical job in the world to me. So after years of being a graphic designer I decided to follow my dream of being an illustrator and completed a Master’s in Children’s Book Illustration at Cambridge School of Art – it was a wonderful course and I have not looked back!

Bookroo: You’ve now written and illustrated four picture books. What is the biggest thing you’ve learned about writing and illustrating picture books now that you didn’t know when you finished your first book?

Jo: The biggest thing I’ve learnt is how creating a book is so much harder than I ever imagined and also takes a lot longer, and it doesn’t seem to get any easier after writing and illustrating four books. I think it’s just part of the creative process; always striving to try and create something truly original and wanting to make it good enough. During this process there are lots of creative struggles, wrestling with the words, trying to fit your story into just 32 pages, visually creating your character and then making sure it looks consistent when animated in different positions. Also accepting that with each book there will be an element of creating work that you don’t feel is good enough and learning to just keep working through persistently with lots of drafts, sketches and experimenting until you make a break through and it feels right. Another important thing I have learnt is that when you have completed the illustrations and text for a book this is only a portion of the work, the next stage of work starts when the book is published in the form of marketing, PR and school visits etc.

Bookroo: Your signature illustration style is incredibly unique. How has it evolved? Whose work most inspires you?

Jo: Nature really inspires me, the beautiful colours and patterns of creatures, flora and fauna never seize to amaze me. So trying to achieve that sense of colour, movement and life into my illustrations has always been a strong base for me creatively. My style evolves with each book and it is the story which determines the look of the illustrations. There are so many artists and illustrators who inspire me but in particular the work of Shaun Tan, Eric Carle and the late, great Brian Wildsmith. 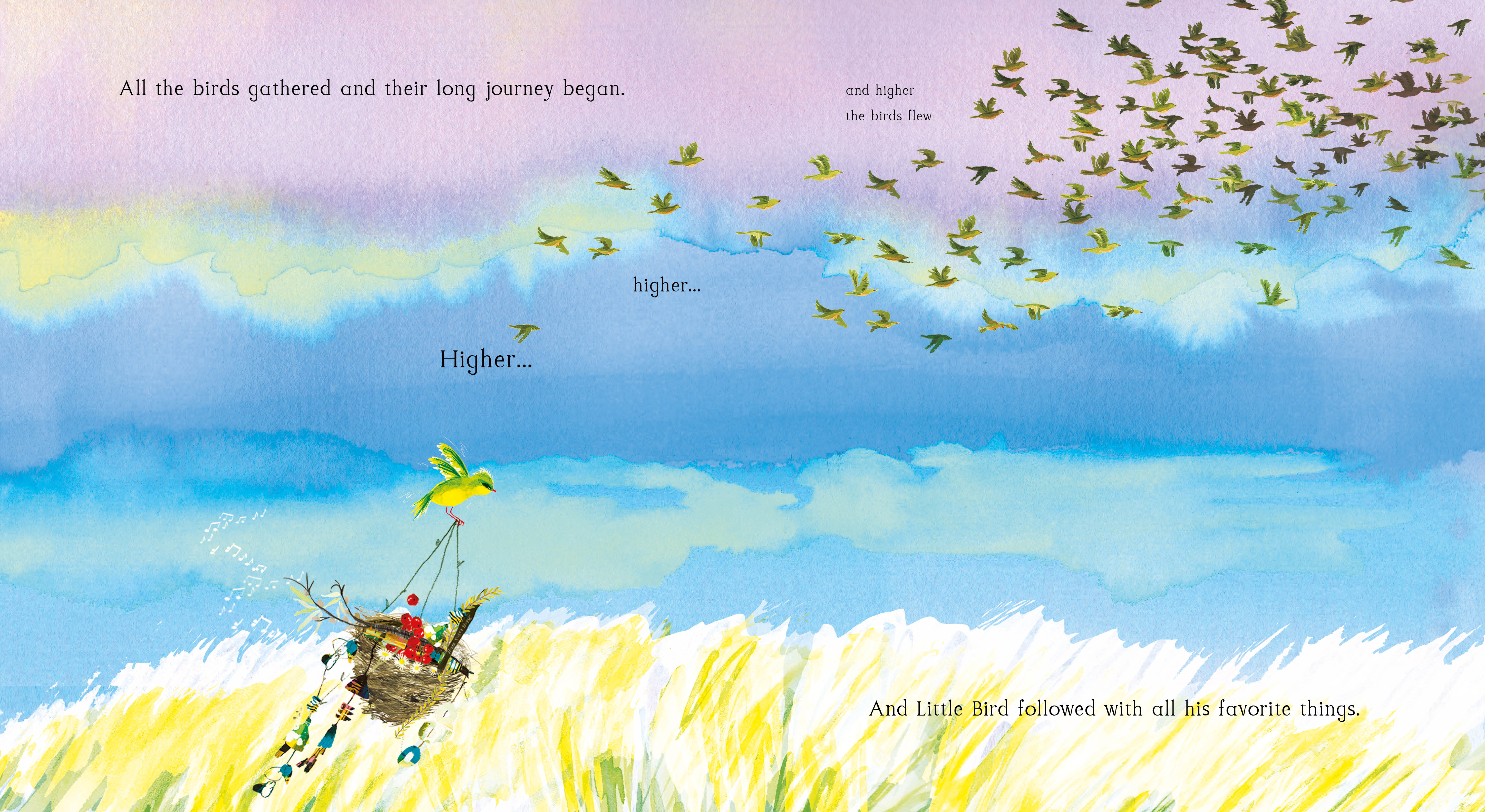 Bookroo: Where do you go or what do you do when you’re in need of a little inspiration?

Jo: I am lucky enough to live amongst beautiful countryside in Wiltshire, so if I need inspiration I go for a walk, usually accompanied by my dog Wilfred. I also spend a lot of time in bookshops and libraries as it’s a great place for seeking out what it is that you admire in other authors / illustrators work, analysing and then trying to define what your own creative voice is. When I feel stuck with a story or idea I tend to have lots of baths, I guess it’s a relaxed stillness which allows a little window in your mind and imagination to open for ideas to flow though uninterrupted.

Bookroo: Little Home Bird is a story that plays on so many levels. Where did the idea originally come from and at what stage did you realize that this idea was going somewhere?

Jo: All my books are conceived from real life events and memories with a sprinkling of exaggeration and imagination, combined with my love of nature. The original idea for Little Home Bird is based around my experiences as a child of having quite a few different homes, my Dad was in the Royal Air Force and so moved around a lot and lived both in the U.K and overseas and when I was very young my parents separated. I wanted to express that home is where your heart is and it is the loved ones in your life that create ‘home’ wherever you are, and not material things. This book went through many cycles and about six drafts before I was happy with the final story. The final version is quite different to the first draft, mainly because I was trying to cram too much into one story, so I set it aside for a while and really thought about what was the message I really wanted this book to convey and then things started to flow much more clearly and I simplified the story right down to the core of the message.

Bookroo: What guides or references did you use while creating the illustrations for Little Home Bird?

Jo: I always start by doing lots of sketches from both life / nature and also watching wildlife videos. 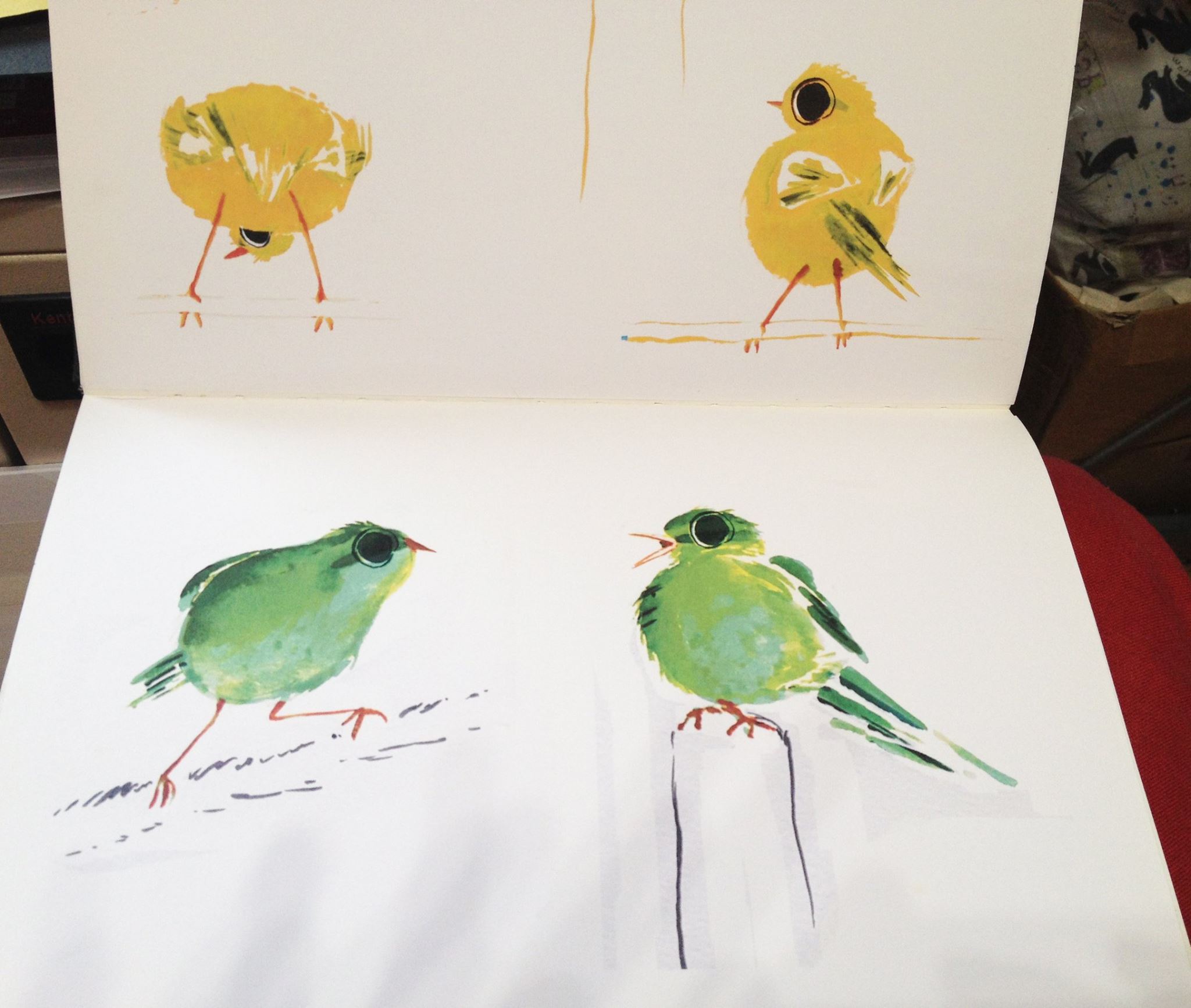 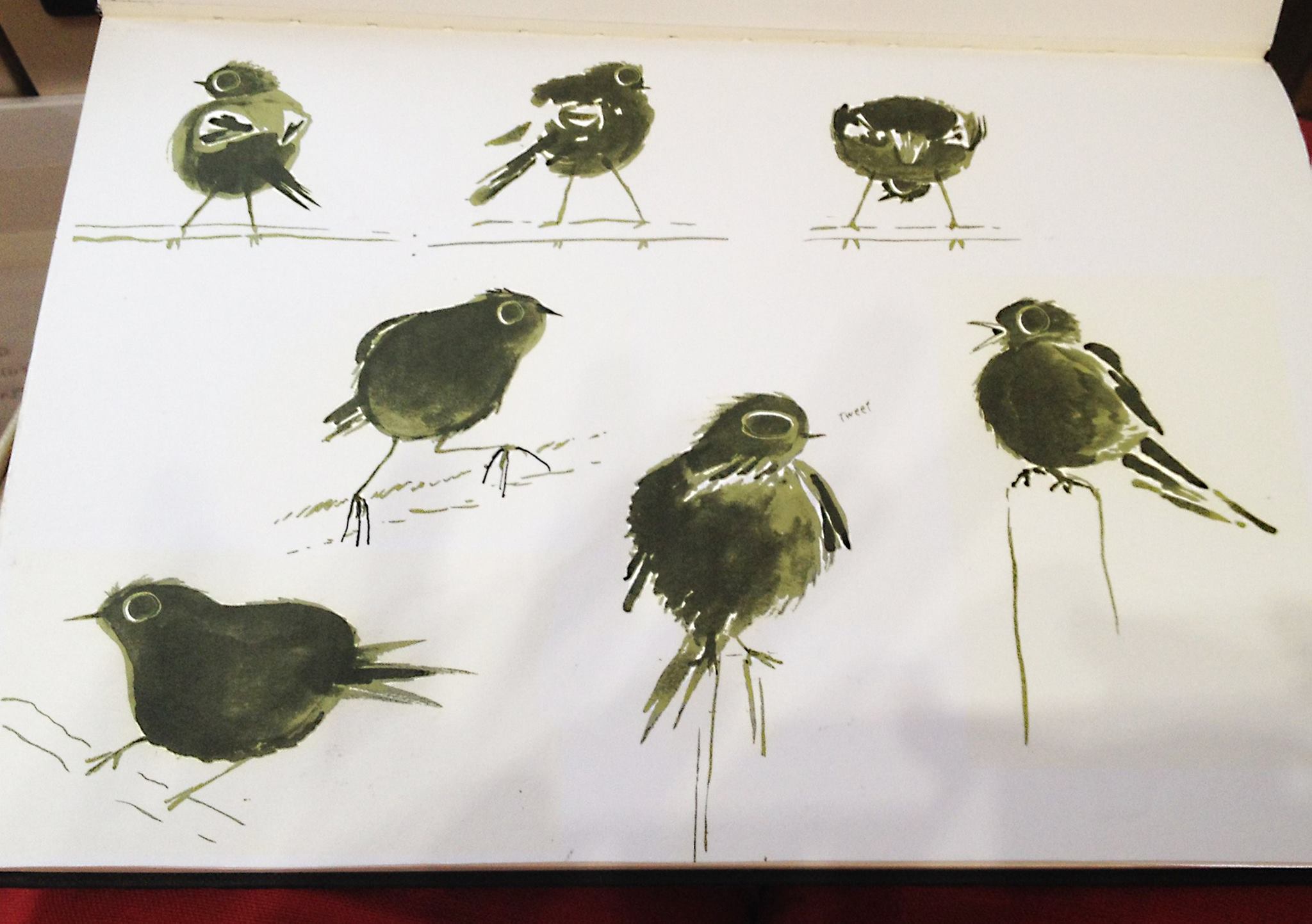 Bookroo: When was your favorite time reading Little Home Bird aloud? Why?

Jo: My favorite time reading Little Home Bird aloud was during The Children’s Bookshow, which is a wonderful organisation which hires theatre spaces so hundreds of school children can see an author perform a reading from their book. I have a super talented friend called Liza Stevens who is a fabulous puppet maker. She made me the most incredible Little Bird puppet which flies across the stage carrying his nest of favourite things and with the help of children from the audience dressed up as the dog, the shepherd and the porcupine, we all act out the story of Little Home Bird. It brings the story alive and having the children taking part makes it very special to me.

Bookroo: What is a goal you'd like to accomplish, either within the field of children's literature, or outside it?

Jo: I really enjoy writing books with important messages for children, so my ultimate aim as an author is to create children’s books with depth and meaning. I would dearly love to see one of my books be brought to life in the form of a different creative medium such as animation or theatre production, there is something very magical about characters and stories being brought to life. I am also really interested in writing for older children.

Bookroo: We’re a community of avid book lovers! Do you have any upcoming work we should be on the lookout for?

Jo: I have a new book coming out in January 2019 called Jungle Jamboree published by Puffin in the U.K, which I’m really excited about. It is packed with many colourful animal characters and is about the true meaning of beauty. Presently I am in the early stages of creating my first picture book for Hodder which is about two Little (Blue or Fairy) Penguins and is inspired by a visit to Australia with my daughter last year. Next year I will also be working on a board book series for Child's Play which I’m looking forward to creating. 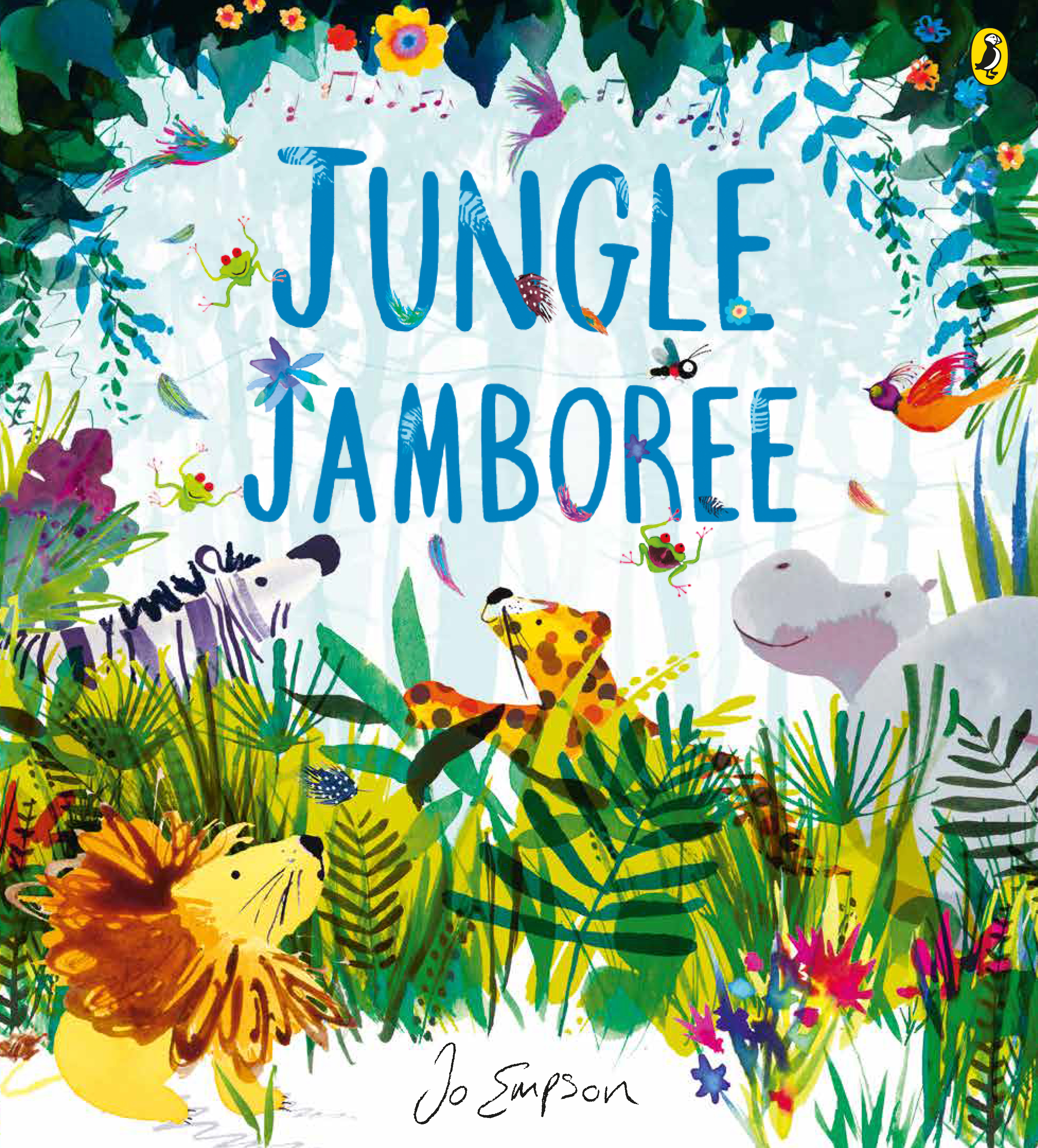 All images courtesy of Jo Epsom.