Getting to know the makers behind some of our favorite children’s books is one of our very favorite parts of Bookroo. It gives us great pleasure to introduce Angela Dominguez to you all! Angela was born in Mexico City, and grew up in Texas. She has authored and/or illustrated twelve children’s books to date, including 11 picture books and most recently, 1 middle grade book. In addition to her book creation efforts, Angela also teaches at the Academy of Art University in San Francisco. 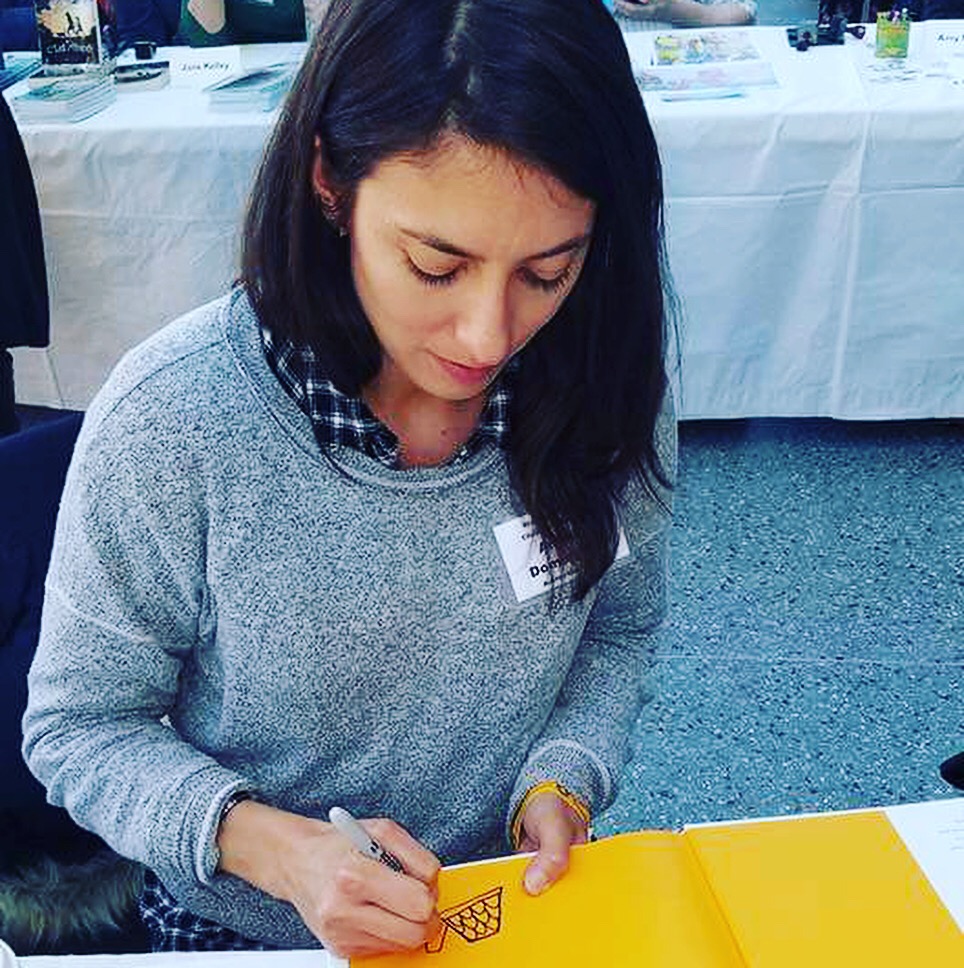 Bookroo: We’ve heard that several of your stories are inspired by your family. Can you tell us a little about that? 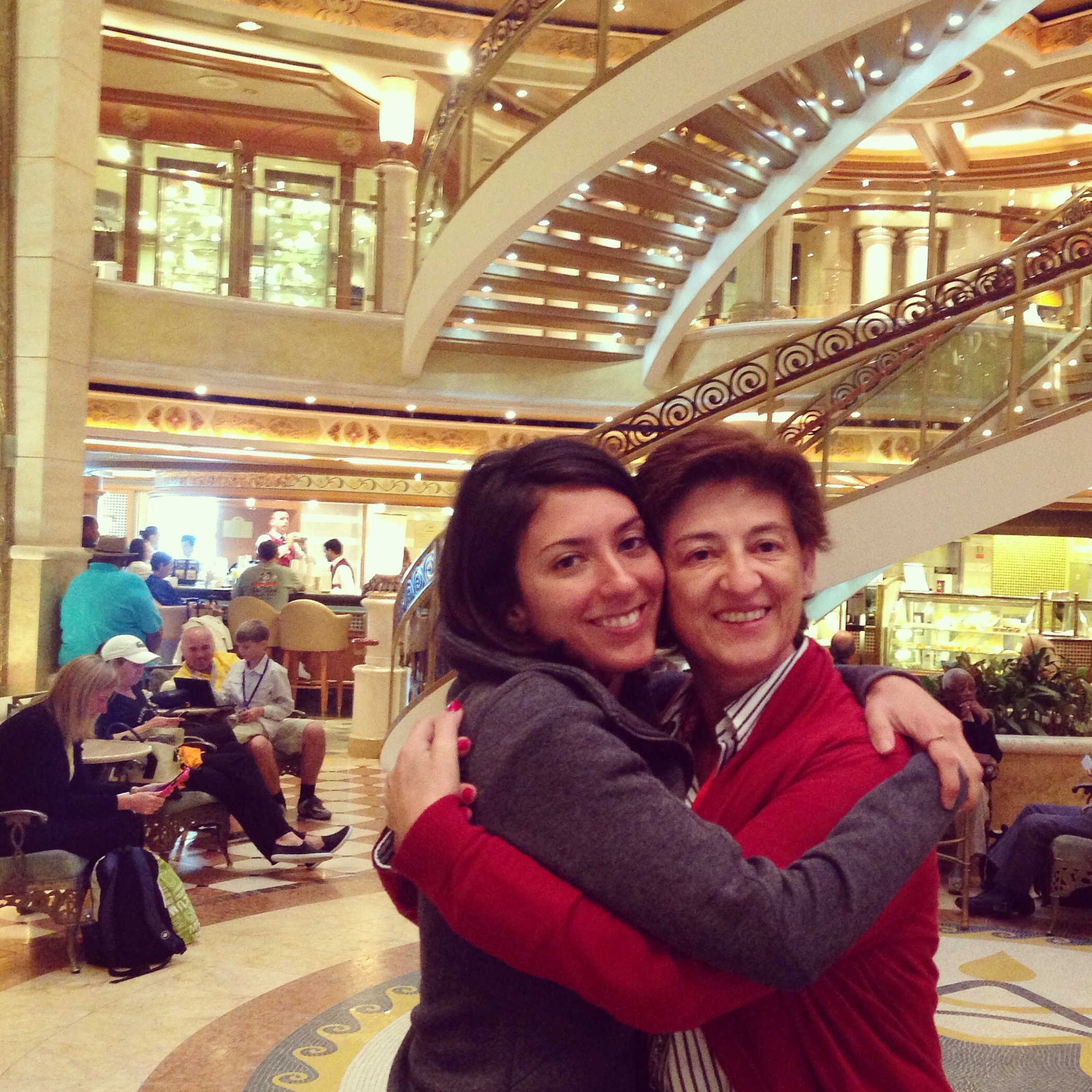 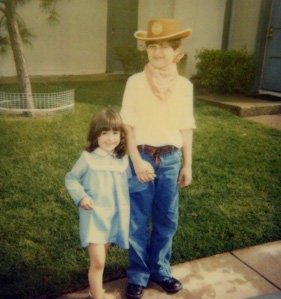 Angela: There’s that adage, “Write what you know.” I happen to know my family very well. Maybe too well. ☺ I’ve included my mom, brother, and grandfather in several of my books like Knit Together, Stella Díaz Has Something to Say, and Sing, Don’t Cry. They shaped so much of my personality especially my Mom, who raised my brother and me on her own. Sometimes I wish I could be a fantasy author, but it’s just not in my wheelhouse…yet. 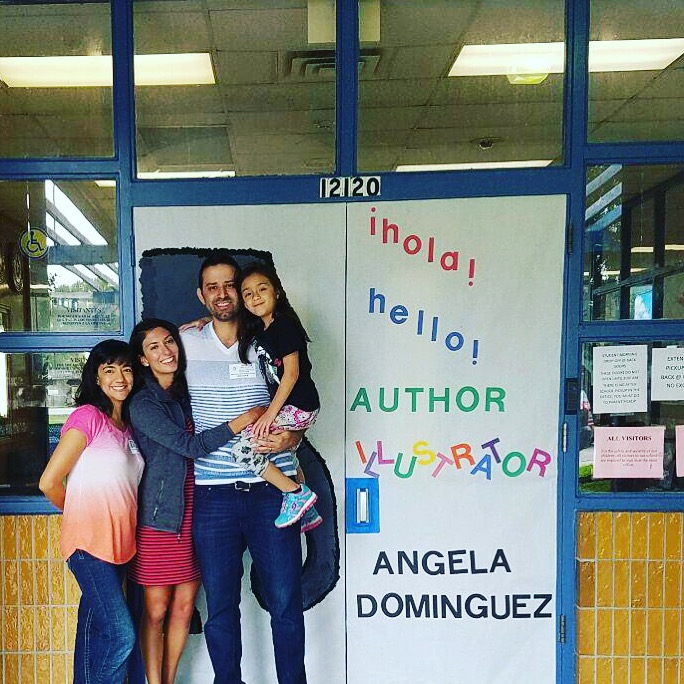 Bookroo: Several of your books are bilingual. Are there any unique challenges associated with that?

Angela: It’s important to me that my books are accessible to native and non-native speakers. With them in mind, I’m deliberate in the words and phrases I use. I want people to be able to infer what a new or unfamiliar word means based on the way it’s written and by the illustration. Beyond that, it’s making sure that the Spanish is universal. There are twenty Spanish speaking countries and each have their own a little twist. That’s where a great editor really helps.

Bookroo: You are both an author and also an illustrator. Do you have a favorite role?

Angela: More and more, I think it’s being an author. I adore drawing. It’s what led me to my illustration career, but writing and conceiving a story is just an adrenaline rush. 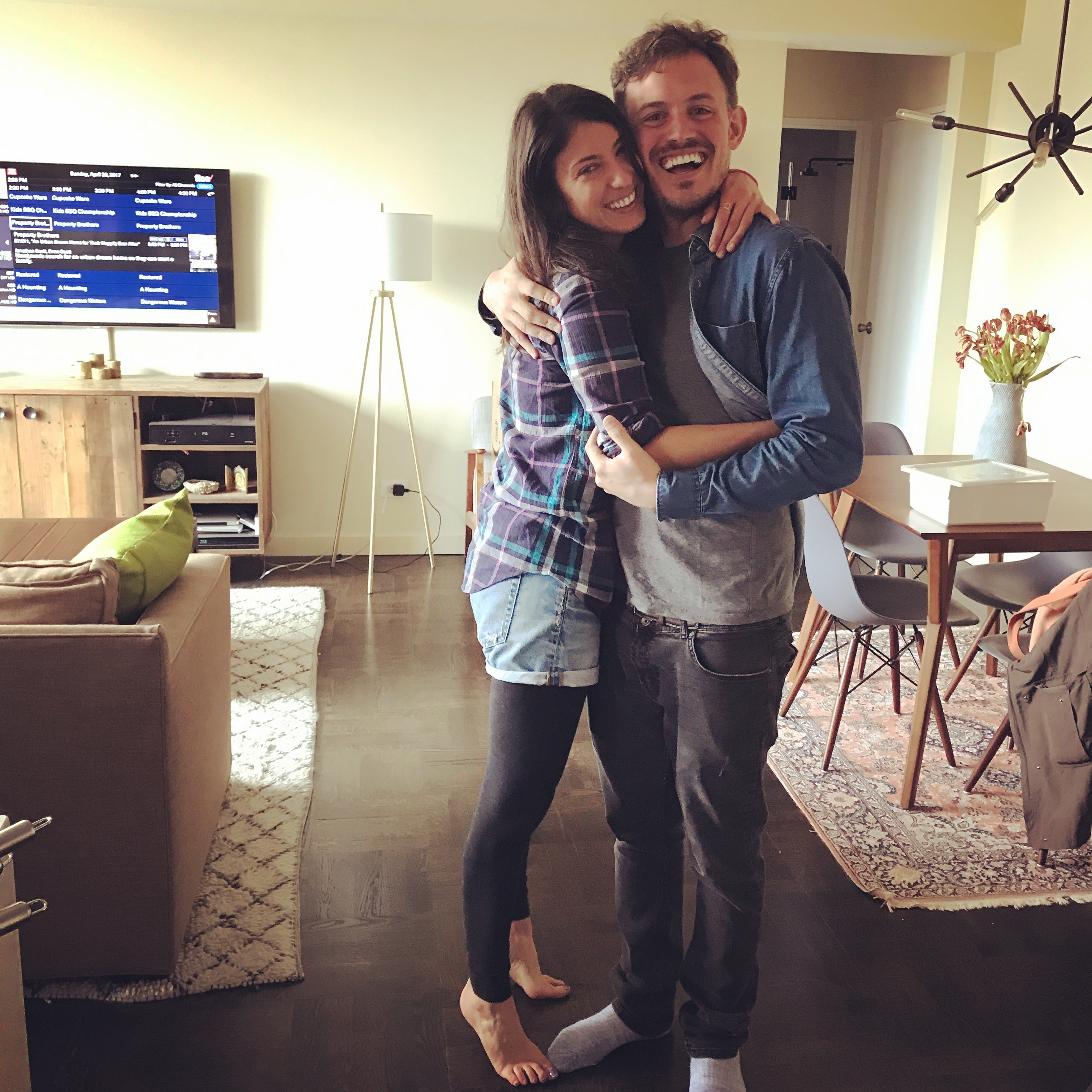 Bookroo: Your illustration style is very unique. How did you go about developing your signature style?

Angela: Thank you! I was lucky to have a distinctive drawing style even in my art school days. I kept a sketchbook drew in it all the time. It’s there where I really developed my illustration style. Then I’ve just continued experimenting with different mediums. 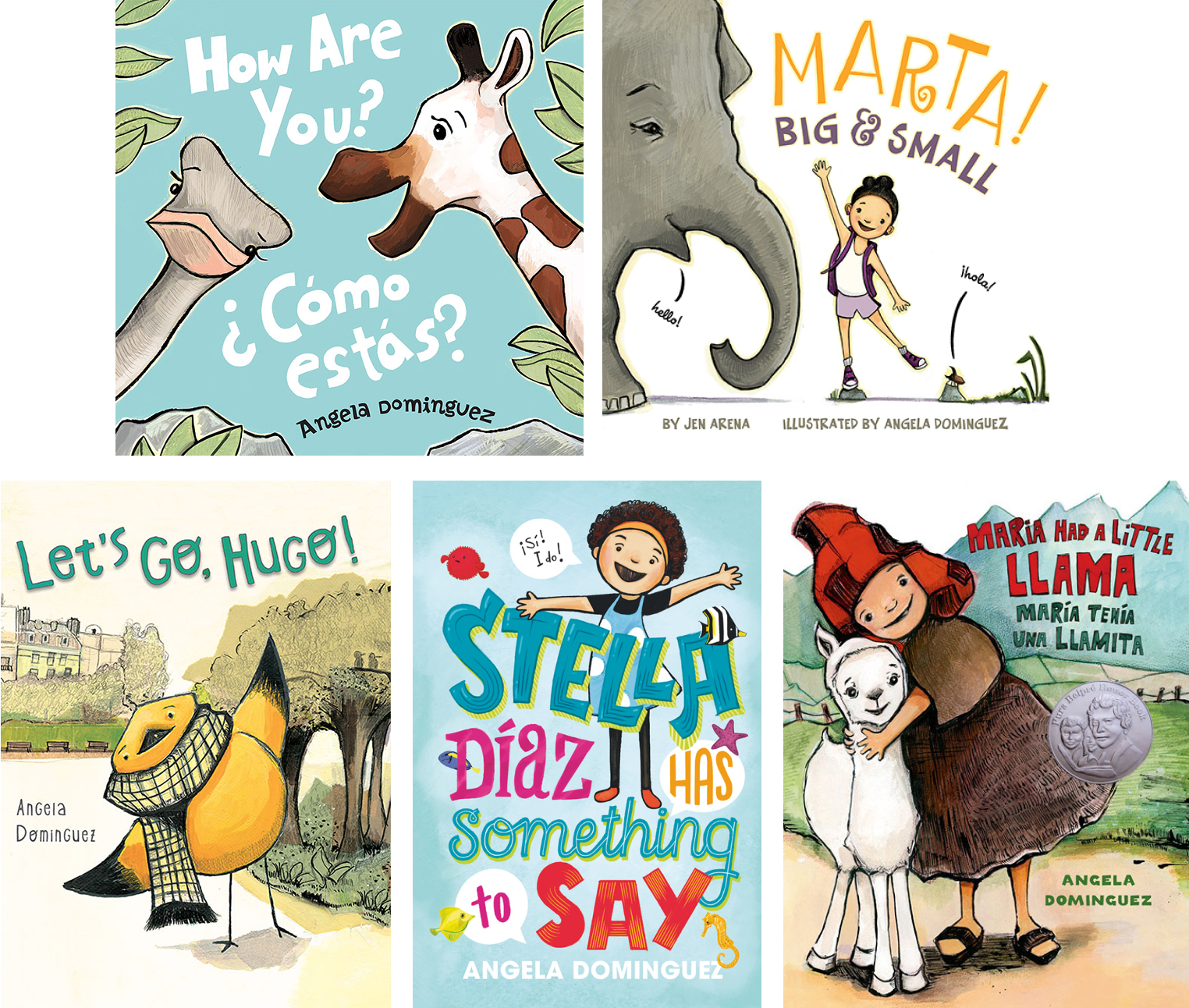 Bookroo: Let’s Go Hugo is a favorite title of ours. Where did the idea for this book originally come from?

Angela: Funnily enough, it all began with a windup chicken toy. My mom sent me one in college for Easter. He became my little mascot. I would windup him up and say “Look at you go, Hugo.” Later in graduate school, I depicted him in an illustration as a yellow bird with a red scarf.

A few years later, I revisited Hugo and did a series of illustrations. I was just trying to revamp my portfolio. My agent, Linda Pratt, was one though who saw that a story was emerging. She encouraged me to write my first picture book.

Writing the actual story was surprisingly easy. I based much of Hugo on where I was personally in my life. Like Hugo, I was content, but I wasn’t taking chances and I was letting fear get in the way. I wanted to take a big leap except mine revolved around writing not flying. Lulu represented for me a what a great friend can do. And I of course, I had to set it in Paris because Hugo is so debonair.

Bookroo: Most recently, you published a middle grade novel. How did your creative process have to adapt from creating picture books?

Angela: The process for Stella Díaz Has Something To Say was a little unusual. It actually began as a picture book. It was just a simple story about a shy little girl at an aquarium who is too afraid to talk to classmate. I worked on it nearly a year with an editor before it ultimately was rejected by the publisher. They just felt it was unclear why Stella was shy and they couldn’t relate to her. Defeated, I abandoned the project for a while.

Luckily a few months later I began illustrating the Lola Levine series by Monica Brown. Reading chapter books gave me the inspiration to expand Stella’s story into a longer format. I filled my story with what I know; my family and my own experiences with being shy. I worked on it secretly by myself and with my agent. Writing a novel was something I always dreamed of doing, but it was scary to put myself out there in this way.

Eventually I found another editor to work with it on and it was picked up by Roaring Brook. When it came to the art, it was a breeze. Because of my sketches for the picture book, I knew what all the characters looked like so I just based them off that.

Bookroo: How has reading influenced your life?

Angela: I don’t think I’d be the person I am today without reading. Reading gave me ideas and continues to do so. It also taught me empathy and gave me windows into other worlds. 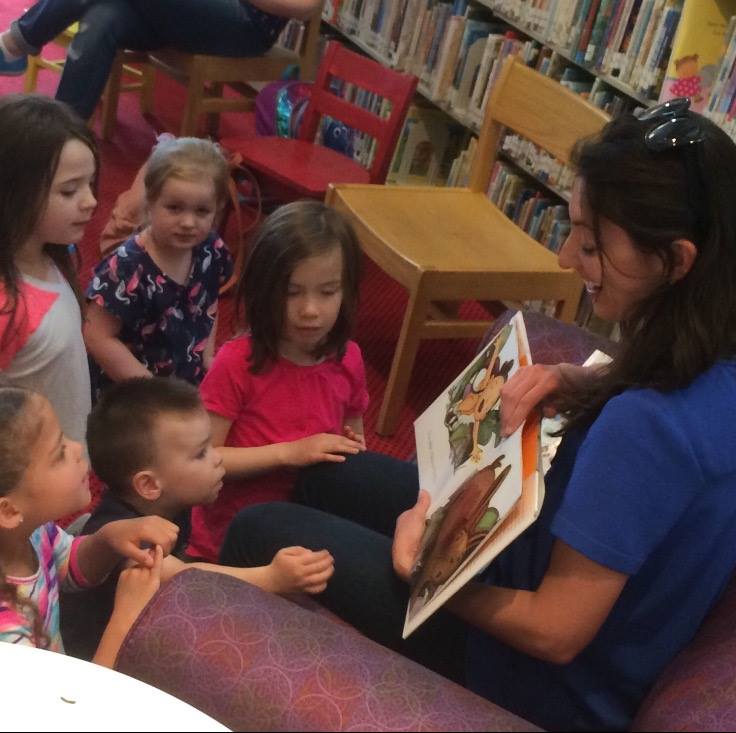 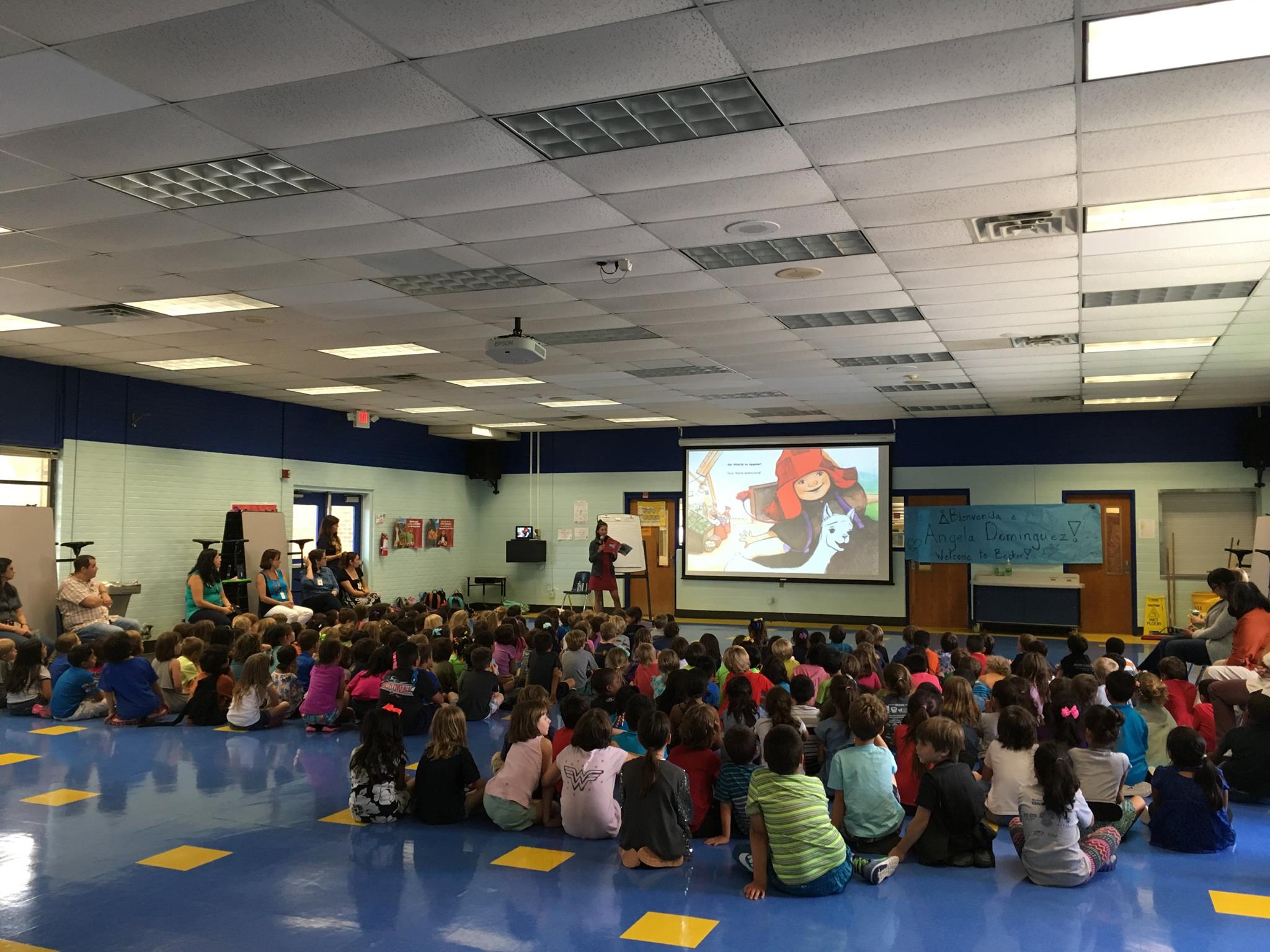 Bookroo: What do you do if you’re in need of a little inspiration?

Angela: I have a little set routine. First, I hit up my local library and bookstore. I find just looking at books inspires me. If that’s not working then a great movie, museum, or long walk outdoors usually does the trick.

Bookroo: If you could collaborate with anyone on a children’s book, who would it be?

Angela: There are so many! I’ll name two. I wish I could collaborate with Roald Dahl. James and The Giant Peach was such an influence on me. Since that’s impossible, I’ll say Lane Smith is probably my top pick.

Bookroo: We’re a community of book lovers! Do you have any upcoming projects you can share with us?

Angela: I am happy to say I’m working on two projects right now. I’m finishing up a book with Candlewick called Kaia and The Bees written by Maribeth Boelts. It’s about a little girl who is afraid of bees. I’m having a blast with the illustrations. I had a friend who was bee keeper so I have some first-hand experience. I also am working on a follow up to Stella Diáz Has Something To Say which is thrilling. Both books will be released in 2020.

We really appreciate the opportunity to get to know Angela better and learn more about her work as an author and illustrator. You can learn even more about her and see more of her work on her website!