How Not To Pull Your Hair Out: Laugh It Off

Coming back from Christmas break, my husband Kesler and I were seated on a plane directly in front of Heather, her husband Steven, and their two kids. We recognized them from our church congregation, but hadn’t really interacted much up to that point. We exchanged pleasantries and then settled in for the flight. Later, as we got ready to deplane, we asked if they needed any help, but they said they had it, and we took them at their word. Let me tell you. They did have it. Two kids, two backpacks and a stroller and they were ready to go. I’m pretty sure they beat us out of the airport they had everything so much under control. 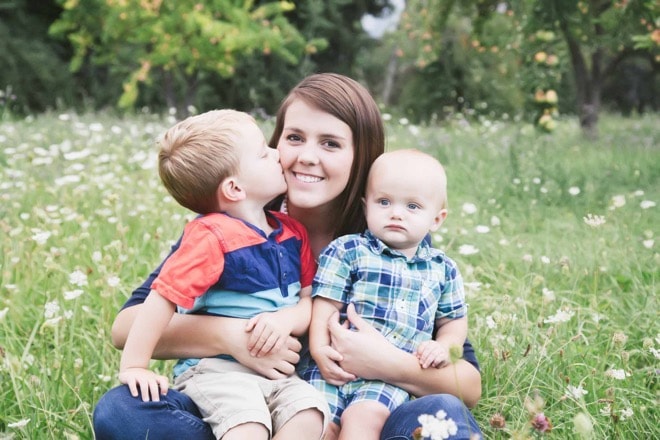 Image credit: Heather and her boys. Photo credit to: http://imagesbyjami.com/

Recently we started working together with the Boy Scouts in our area, and Heather asked me to babysit her boys while she and Steven went to a concert for her birthday. Those boys were so ridiculously good and sweet while I babysat them. That’s when I decided Heather would be the perfect first spotlight.

Heather and her husband Stephen met in the 9th grade, then reconnected at BYU and got married. Heather has an Elementary Education degree and taught 1st and 2nd grade for a year each. Now she has more than 300 children’s books in their student apartment for their two sweet boys: Daniel (3) and Micah (1).

As I approached their apartment, I saw a small, red and yellow circus tent through the open door–their house looked fun even from the outside! As I was welcomed inside, I noticed there were crafts on the table. Daniel sat comfortably on the couch watching an episode of Baby Einstein, and Micah was walking around with a huge grin on his face.

Heather has a routine, but it’s pretty low key, and probably much like your own. They usually run an errand in the morning to get out of the house, then have lunch and do naps. While Micah takes a nap, Daniel has some quiet time, which could be reading, watching a short show or doing some small school activity. Part of the routine varies by day of the week. Tuesday and Wednesday they try to go on a little outing. Thursday and Friday Steven doesn’t have classes, so they go on bigger outings as a family.

I noticed that the boys LOVE to read when I was babysitting (we probably read 10 books in the hour that they were awake), so later I asked Heather how she fostered that. The answer is she loves to read. In fact, that’s what she does when she gets a minute to herself. And so, she reads to the boys a lot. As we talked, she noted that reading is a good way for them to regroup if someone’s having a rough spell. Reading a couple books together calms both her and the kids down, and makes things easier to deal with. She’s been reading to Daniel since he was a couple weeks old, and Micah from day one. 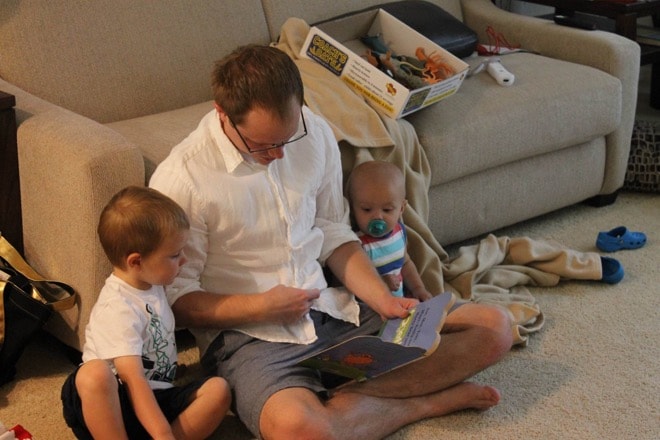 Her favorite children’s book these days? Guess Again! by Mac Barnett. Often reading to kids means you end up reading the same book over and over again, and with this one she doesn’t mind so much. They do have a rule though. She won’t read them the same book twice in a row. In fact, genius idea #1 coming up right here, they have three shelves for books in the living room. Each night she moves all the books to the bottom two shelves, and then as they read books throughout the day, they move them to the top shelf, so there aren’t repeats.

I also asked Heather how she got the two kids to be so obedient. When babysitting, I told them “It’s time for bed,” and they said “Ok!” and brushed teeth, asked for blankets and bottles, and got in bed. When I told Heather this as I was leaving that night after babysitting, she laughed and said something to the effect of, “I’m glad! They didn’t always used to be like this, and it’s been a hard road to get here.” That’s an important principle for all of us to remember. Kids aren’t born obedient, but it’s a behavior that can be taught well.

The key to their obedience, Heather said, is that she and Steven set high expectations for Daniel and Micah. When Heather studied Elementary Education, she was always taught to have high expectations of children, and that they will rise to meet those expectations. And they do. Heather says she and Steven also make an effort to praise and reinforce good behavior. They have rewards systems in place too, among these sticker charts on the wall for good eating and little jars with happy and sad faces on them with a number of beads in them. If there are any beads in the happy jar at the end of the day, Daniel gets some sort of reward.

But like all kids, they aren’t perfectly obedient all the time. Right now, Heather and Steven are working on teaching them that it’s not ok to jump on the couch. In fact they had a lesson on it last night, but Heather said it hasn’t quite sunk in yet. As Heather acknowledged, “It’s a repeated process.”

Heather got tired of Daniel asking for fruit snacks four times or more a day, and so the snack basket was born. The basket has a granola bar, one package of fruit snacks, fruit leather, etc. Whenever Daniel is hungry throughout the day, he can get something out the snack basket. Except between 11-1, which is designated as lunch time. They eat at 12, so he can neither spoil his lunch, nor get away with not eating it and just getting a snack afterwards. Same thing with dinner time. It also gives Daniel some choices and responsibility.

Another thing Heather does if she gets a spare minute is create things that will make parenting easier for her in the future. Like file folder games. They are both educational, enjoyable and easily storable. Plus pretty cheap entertainment. She has some from teaching, but has gotten her most recent ones off of Etsy. Plus her kids love them. When she got some out to show me, Daniel came right over and wanted to do a couple. Micah wanted to help too, but he hasn’t quite learned all his numbers and letters yet :)

“If I could remind mothers of one thing…”

I asked Heather, “If you could remind mothers of one thing, what would it be?” Her answer was insightful. She said, “Moms have a tendency to compare with each other. I’m guilty of it as well. Learning how to not let it get to you is important. Facebook and Instagram are always showing the best of what people do, but they’re not seeing the day to day. The tantrums that get thrown, the bathroom break to get 15 minutes to yourself just because you can. I think it’s important to remember that we all have those times when things are hard. But it’s worth it.”

Her parting advice to me can be found in the title of this post. “How not to pull your hair out? Laugh it off.”