Learning What Works for You and Your Roo 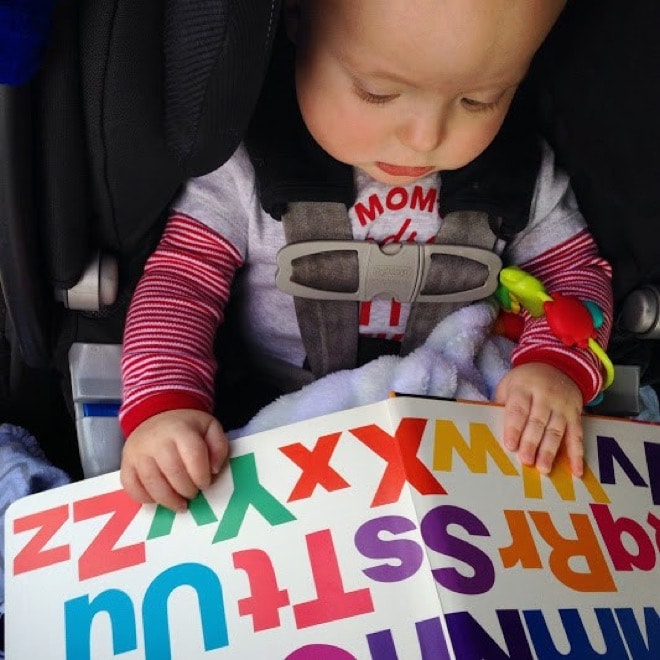 This post was written by Tayler and Rebecca. We interviewed Brett, Katie, and their little guy, Jack, and had so much fun visiting with them. Brett and Katie had some great advice for other parents, and Jack just made us a laugh. He’s full of personality.

Tayler: Brett and Katie have been my friends for many years. Brett and I won a Little League baseball state tournament when we were 10 years old, and continued to play baseball and basketball together all through high school graduation. Brett pitched and I caught.

Katie moved to our high school in 10th grade. I don’t think any move-ins had an easier time making friends than Katie did. She was always laughing and smiling. I still remember she and some of her girlfriends cheering us on loudly at our baseball games.

Brett, Katie, and I all ended up at the same university a couple years after high school. I’ll always remember spending the day at their wedding and reception. The bridesmaids, groomsmen and even Brett and Katie (in her wedding dress) all did a fun little flash mob in celebration.

Rebecca: Their little guy, Jack, is almost one year old. He is a bright-eyed, smart little guy, and he already loves throwing little toy balls around the house (future pitcher maybe?). Tayler and I had so much fun visiting with Katie, Brett, and Jack and asking about their experiences.

Rebecca: First, lets start with some of Jack’s favorites! Jack loves to play catch, watch Barney, and splash in the bath. He is always smiling when he’s excited, which leads to a bit of baby drool. Because he always gets excited for visitors, he may or may not have been drooling for the first ten minutes we were there. :) Perhaps our favorite, Jack loves the Parks and Recreation theme song. In fact, Brett and Katie learned that they can’t easily get away with watching an episode after putting Jack to sleep, because if he hears it, he wants to come join the fun.

Tayler: Jack’s favorite game is playing chase. As mom and dad run down the hall with Jack to chase one another, Jack laughs his hardest. Although they are the ones doing all the running, with Jack just along in their arms for the ride, at the end Jack is always the one to sigh like he’s tired.

Jack doesn’t read by himself yet of course, but he does copy everything mom and dad do. Brett and Katie enjoy reading, and when they have their books pulled out, Jack is soon to follow, paging through a board book all by himself. The first book Jack reaches for is often his favorite, Barnyard Dance! by Sandra Boynton. By repeatedly showing Jack their love for reading, Brett and Katie hope to be examples to teach Jack throughout his life.

Rebecca: Brett and Katie think repetition is a key to Jack’s learning process. His parents utilize it not only through reading, but in sign language, and in playing chase. They don’t worry if he doesn’t catch on at first–like when they have family prayer at night and he doesn’t want to close his eyes or fold his arms quite yet–because they’ve seen that when they are consistent, Jack learns best.

One of Katie’s favorite memories of Jack so far was a simple, but tender moment at home. After watching a movie, she and Jack were dancing to the credits. Jack started really giggling for the first time, and Katie was reminded of the pure joy that comes from being a mom. I loved that such an everyday sort of moment could be so meaningful to Katie.

Tayler: Brett loves the insight Jack brings to life. He watches him learning to play catch, and when something goes wrong, Jack just giggles. Even when undertaking the difficulties of discovering a new world, instead of becoming frustrated through failure and the unknown, Jack enjoys learning. Brett mentioned that it wouldn’t hurt any of us to be more like that.

Rebecca: One of the biggest challenges Katie faced with Jack was breastfeeding. She wanted to breastfeed because she believed it was important for health and bonding, but Jack was really difficult. She struggled for months, believing that she just had to do it. She said that even her own mother and mother-in-law, after learning how difficult Jack was with it, told her it would be okay to end earlier than she planned, but she just couldn’t stop trying.

Now, looking back, she explained that she would have been better off finishing breastfeeding earlier than she planned. She said that she was grateful that she had breastfed, but that she realized she didn’t need to feel the pressure of continuing just because it worked well for others.

Tayler: Along the same lines, Brett explained that Jack really didn’t like baby food. They tried that at first, but eventually realized that he really wanted the same food they were eating. Perhaps having learned their lesson with breastfeeding, they decided that if that was what Jack wanted, they would just go with it. Almost one year old, Jack loves mashed potatoes.

“If I could remind mothers of one thing…”

Rebecca: When we asked Katie, “If you could remind mothers of one thing, what would it be?” She replied with this genuine advice: moms need to remember to “do what’s best for you.” Reflecting back on her experiences, Katie remembers many people offering “advice” that really consisted of negative comments. They would warn her how hard things were going to be, the parts that were going to be the worst. Katie says, “Don’t listen to the negatives of people that have done it before.” The people who say, “Having a baby is so hard,” or “You’re about to be twice as busy as you have ever been.” The negatives didn’t help one bit—they just cast foreboding views on the future.

Instead, Katie reminds mothers that you can do it! You just need to figure out what you and your child need, and avoid comparing yourself to anyone around you. With that in mind, Katie’s opinion is that “every new stage gets better and better.”