We Read the Books on the Shelf

The books sitting on the shelves in my house were lawyer books. John Grisham books to be precise. My dad is an attorney, and he has a big library in his home office. I never approached most of his books — Cardozo on the Law didn’t sound too enticing as a teenager. But sometime in my early teens, I picked a book off the highest shelf called The Brethren by Grisham, and I loved it. Three imprisoned former judges blackmail the leading presidential candidate? Sounds enticing, right? After The Brethren, I moved to The Runaway Jury. Eventually, I read all of my dad’s Grisham books. Why? Because they were there. But I’m not the only one who reads because books are sitting around on bookshelves. Turns out, most of us read more when more books are available.

A couple months ago, one of my co-founders shared a fascinating New York Times article written by Teddy Wayne, who shared recent research about the positive impact of having home libraries. According to a study, children may read at higher performance levels simply because they have many books in their homes. The size of their home library impacted all children in the study (a study across 42 nations) whether they were from high- or low-status families. For high-status families, “Those with 500 books perform half a grade better than those with just 100.” And for more modest families, even 75 books improved grade level reading by one and a half grade levels. Additionally, according to the study,

The gain from a 500-book home library rather than from a one-book library is equivalent to the gain of somewhere between one or two additional years in school (for Finland, the Netherlands, Canada, etc.) and three additional years (for Hungary, Germany, the UK, etc.). In the United States, the gain is about two-and-a-half years.

Staggering, right? In essence, parents can make a big impact on their child’s reading performance simply by making sure they have home libraries.

Since reading the NYTimes article, I’ve noticed more and more the truth that if a book is lying around, I read it. And I notice the same pattern in others.

A couple months ago, my wife gave me a book, The Wright Brothers, by David McCullough, that illustrated this idea perfectly. I never knew much about Orville and Wilbur Wright, but what I learned by reading about them was fascinating. The brothers consumed books ravenously. Their father understood that if books were available, his boys would read them. The family had a modest home, but, according to McCullough, the family book collection “was neither modest nor commonplace,” and included everything from Dickens and Hawthorne to Gibbon’s Decline and Fall of the Roman Empire and Thucydides. McCullough wrote, “Everyone in the house read all the time.” When the brothers began to study flying, they started by reading all about birds. But they didn’t have to go far to find the books. Their earliest reading about flight and birds came from their own home library. Did you catch that? The home library where their father just happened to have a copy of a book called Animal Mechanism, a thirty-year-old volume by a French physician.

“The Wright family book collection . . . was neither modest nor commonplace. . . . Everyone in the house read all the time.”

Chapter 1 of The Wright Brothers

Neither of the brothers went to college, but as their fame spread, accounts of their brilliance did too. Their mechanical genius became obvious from their flights, but reporters were intrigued that the brothers seemed so well-rounded. For example, during exhibition trips in France, Wilbur, who particularly loved history, spent hours studying architecture and art. McCullough wrote that “such keen interest as he had in art was not only remarkable in someone so committed to technical innovation, but a measure of a truly exceptional capacity of mind.” 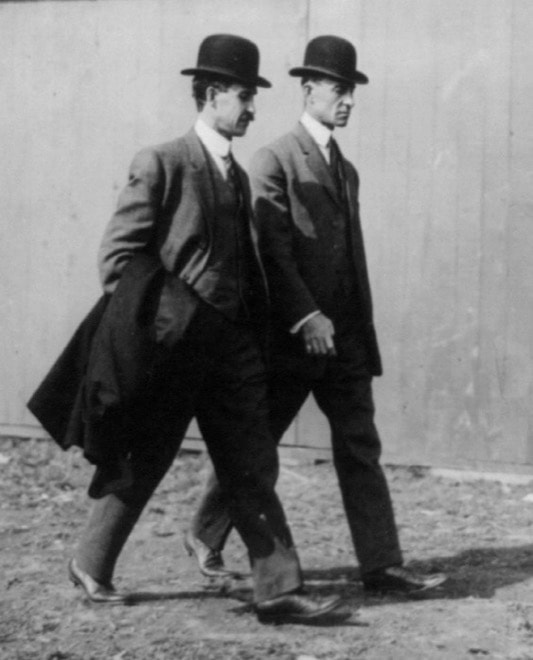 It’s no surprise the brothers pioneered flight, but I was surprised to hear about their ordinary beginnings and the early reading and studying that made such a difference in their future.

Last Thanksgiving break, my wife and I stayed for a few nights at her parents’ home. The first day there, I noticed a copy of To Kill A Mockingbird sitting on one of the end tables in the dining room. My mother-in-law said that she was reading it. True to form, during a lull in family activities I picked up the book and started reading. I had read it with my ninth grade class, but I was concerned when my wife asked me the meaning of the title and I couldn’t explain it. I was surprised how enjoyable the book was to read again. The main character, a young girl named Scout, is witty, spunky, and hilarious, but also honest and impressionable. I was only a few chapters in when we left my in-laws’ home, but I was hooked. I found a copy and finished the book a few weeks later.

“Until I feared I would lose it, I never loved to read. One does not love breathing.”

Chapter 2 of To Kill a Mockingbird

When I was in junior high, my older brother had a copy of Cassidy (a historical novel about Butch Cassidy) by Lee Nelson. My brother was in high school, and the book was a number of grade levels above my own grade reading level. Despite that, when I saw it sitting around, I picked it up and began reading. I was fascinated right from the start. I loved reading about Butch Cassidy learning to shoot, rope, and ride. My brother finished the book before I did, but I convinced him to check it out of his school library so that I could finish it. Why did I read it? Because it was there.

In fifth grade, I read The Lord of the Rings. My interest was piqued because the first movie, The Fellowship of the Ring, had just been released. I remember feeling proud that I could reach such large books. This time, I might have picked a trilogy of books a little tougher than I could understand. I followed the main ideas, but I don’t know that I really understood a lot of the details. Still, I read. Why? Because the books were there. All four Tolkien books sat on the bottom shelf of the bookcase. (Recently, I decided to read the books again, and after enjoying The Hobbit, I’m about halfway through The Fellowship. The books are fabulous.)

According to the 2015 Kids & Family Reading Report by Scholastic, “Nearly three-quarters of both boys and girls (73%) say they would read more if they could find more books they like.” We think that’s an easy problem to solve, but a problem that, if solved, will have a big impact. That’s why Bookroo supported Startup Santa, a United Way partnership program, this Christmas season. Since we launched a little less than one year ago, we’ve donated nearly $3,000 worth of books, so children who don’t have books can get them. We learned from our own experience that we read when books are readily available. That’s our whole goal at Bookroo. We want parents to have a fun, simple way to make sure the bookshelf is full. Because the books on the bookshelf get read.

Remember those lawyer books I mentioned? Well, what we read early can have a big impact later. I’m halfway through my first year of law school today. I’m still a little intimidated by Cardozo on the Law, but I’m getting closer to pulling it off the shelf and taking a look.

So how about you? Can you remember any books you read mostly because they were sitting around the house?