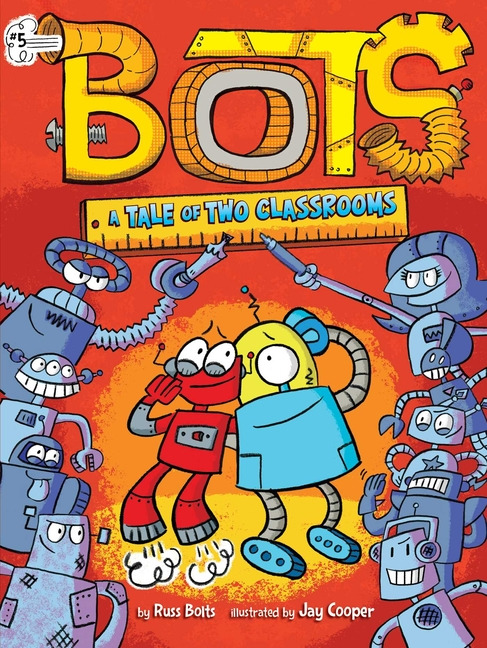 A Tale of Two Classrooms

Written by Russ Bolts & illustrated by Jay Cooper
Book #5 in the Bots Series
Published by Little Simon
Buy on Bookshop.orgBuy on Amazon
Prices as of Aug 16

Joe and Rob are separated into two different classrooms in this fifth adventure in the hilarious Bots chapter book series. Many years ago, scientists on Earth sent video satellites out to the end of the universe to see what was hiding in deep space. Now, years later, these satellites have begun sending their first videos back to Earth…and the stars of the show are two goofy robots. When Joe and Rob are separated into two different classrooms, will their lives ever be the same? With easy-to-read language and graphic novel art on almost every page, the Bots chapter books are perfect for emerging readers.

What Kind of Book is A Tale of Two Classrooms

#1 in Series
The Most Annoying Robots In The Universe
#2 in Series
Graphic Nov.
The Good, the Bad, and the Cowbots
#3 in Series
20,000 Robots Under the Sea
#4 in Series
The Dragon Bots
#6 in Series
The Secret Space Station
View more