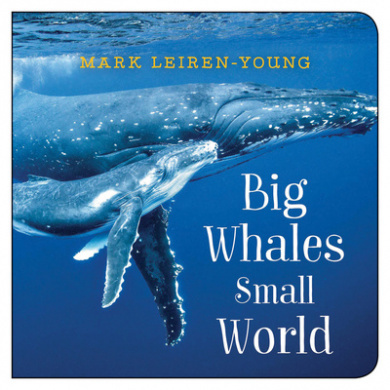 In Big Whales, Small World you will meet whales from around the world. This rhyming photographic board book visits the oceans of places like New Zealand, Russia and South America. Writer, filmmaker and orca activist Mark Leiren-Young introduces young readers to blue whales bigger than dinosaurs and tiny vaquitas who swim close to shores.

Mark Leiren-Young is a writer, documentary filmmaker, podcaster and orca activist. His book The Killer Whale Who Changed the World won the Science Writers and Communicators of Canada general audience book award. He wrote, directed and produced an award-winning documentary called The Hundred-Year-Old Whale, and his documentary about Moby Doll is being produced by Middle Child Films. Mark hosts a podcast about orca and ocean stories and is actively involved in the fight for the survival of the endangered southern residents. Mark has written for other young audiences for ABC, PBS, YTV, Treehouse and BBC Kids. He lives in Victoria, British Columbia.

What Has Mark Leiren-Young Said About This Book

Nothing yet! 🤷 You should let Mark know that you want more details about Big Whales, Small World!