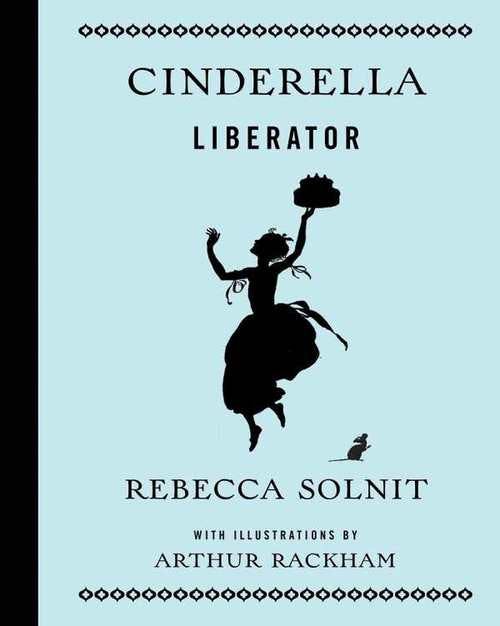 Written by Rebecca Solnit & illustrated by Arthur Rackham
Published by Haymarket Books
Buy on Bookshop.orgBuy on Amazon
Prices as of Sep 21

In her debut children’s book, Rebecca Solnit reimagines a classic fairytale with a fresh, feminist Cinderella and new plot twists that will inspire young readers to change the world, featuring gorgeous silhouettes from Arthur Rackham on each page. In this modern twist on the classic story, Cinderella, who would rather just be Ella, meets her fairy godmother, goes to a ball, and makes friends with a prince. But that is where the familiar story ends. Instead of waiting to be rescued, Cinderella learns that she can save herself and those around her by being true to herself and standing up for what she believes.

What Kind of Book is Cinderella Liberator

Writer, historian, and activist Rebecca Solnit is the author of more than twenty books on feminism, western and indigenous history, popular power, social change and insurrection, wandering and walking, hope and disaster, including the books Men Explain Things to Me, Call Them By Their True Names, Hope in the Dark, and The Mother of All Questions all with Haymarket Books; a trilogy of atlases of American cities; The Faraway Nearby; A Paradise Built in Hell: The Extraordinary Communities that Arise in Disaster; A Field Guide to Getting Lost; Wanderlust: A History of Walking; and River of Shadows, Eadweard Muybridge and the Technological Wild West. She has received numerous awards and accolades, including a Guggenheim, the National Book Critics Circle Award in criticism, and the Lannan Literary Award for nonfiction. She was a finalist in 2017 for the PEN America Art of the Essay award for The Mother of All Questions that was also listed as one of The San Francisco Chronicle’s best books of the year. A product of the California public education system from kindergarten to graduate school, she is a columnist at Harper’s and a regular contributor to The Guardian.

Arthur Rackham (1867-1939) was described by The London Times as “one of the most eminent book illustrators of his day” with “ a special place in the hearts of children.” He was a prominent British illustrator of many classic children’s books from The Fairy Tales of the Brothers Grimm to Sleeping Beauty to Fairy Tales by Hans Andersen and dozens more. His illustrations from the 1919 edition of Cinderella are timeless examples of his unique and beautiful watercolor sillouettes.

What Has Rebecca Solnit Said About This Book

Nothing yet! You should let Rebecca Solnit know that you want to hear from them about their book.

What Has Arthur Rackham Said About This Book

Nothing yet! You should let Arthur Rackham know that you want to hear from them about their book.