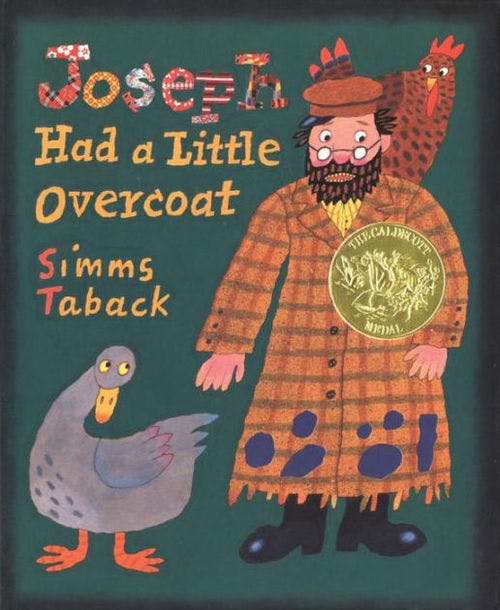 Joseph Had a Little Overcoat

Written and illustrated by Simms Taback
Published by Penguin Young Readers Group
Buy on Bookshop.orgBuy on Amazon
Prices as of Oct 22

A very old overcoat is recycled numerous times into a variety of garments.

What Kind of Book is Joseph Had a Little Overcoat

This was a fun little story about using up and wearing out what we have. A great story about recycling our own things in our own way.

The illustrations in this book are very fun (Caldecott Honor book, so you'd expect nothing less!) and my favorite part is how detailed they are, with fun little references to Fiddler on the Roof and other cultural phenomena. It is a little moralizing (but it says it will be right up front and doesn't pretend to anything else!) but the lesson is a great one in our throw it away world...reuse and reinvent! It's not personally my favorite book, but I can see why it's beloved.

Awards Given to This Book

What Has Simms Taback Said About This Book

Nothing yet! You should let Simms Taback know that you want to hear from them about their book.