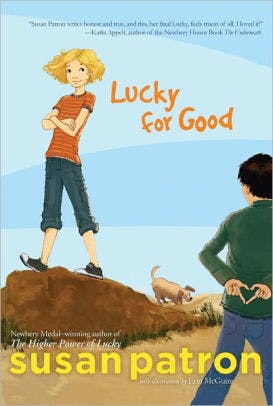 Goodreads3.9 / 5
The Definitive Guide to

Illustrated by Erin McGuire
Book #3 in the Hard Pan Trilogy Series
Published by Atheneum Books for Young Readers
Buy on Bookshop.orgBuy on Amazon
Prices as of Oct 21

What's Lucky for Good About

The residents of Hard Pan, California, come together to help Brigitte and Lucky when the County Health Department threatens to close down the cafâe, and meantime Miles’s life is complicated by his mother’s return.

What Kind of Book is Lucky for Good

Book Lists That Include Lucky for Good

Susan Patron specialized in Children’s Services for 35 years at the Los Angeles Public Library before retiring in 2007, the same year her novel The Higher Power of Lucky was awarded the John Newbery Medal. As the library’s Juvenile Materials Collection Development Manager, she trained and mentored children’s librarians in 72 branches. Patron has served on many book award committees, including the Caldecott and Laura Ingalls Wilder Committees of the American Library Association. She is currently a member of the Advisory Board of the Society of Children’s Book Writers and Illustrators. Patron’s previous books for children include the Billy Que trilogy of picture books; Dark Cloud Strong Breeze; and a chapter book, Maybe Yes, Maybe No, Maybe Maybe. All earned starred reviews, and the latter was named an ALA Notable book. The Higher Power of Luck will be translated into twelve foreign languages and has been optioned for a motion picture. Married to a rare book restorer from the Champagne region of France, Susan is working on the final book in the “Lucky” trilogy.

What Has Susan Patron Said About This Book

Nothing yet! You should let Susan Patron know that you want to hear from them about their book.

What Has Erin McGuire Said About This Book

Nothing yet! You should let Erin McGuire know that you want to hear from them about their book.

Discover All the Books in the Hard Pan Trilogy Series

Other Books You Might Enjoy If You Liked Lucky for Good