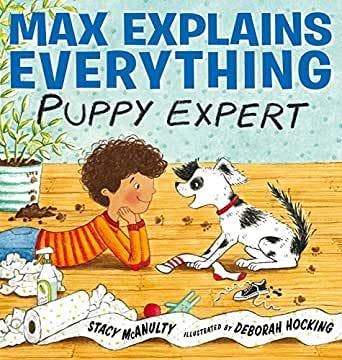 Written by Stacy McAnulty & illustrated by Deborah Hocking
Part of the Max Explains Everything Book Series
Published by G.P. Putnam's Sons Books For Young Readers
Buy on Bookshop.orgBuy on Amazon
Prices as of Jun 20

What Does Bookroo Think of This Book

“In this fun story, Max helps readers see the work and joy that a puppy can be.”

Max is back again to share with young readers more of his expertise, this time about all things puppy. In a telling dedication, McAnulty dedicates the story to her own nieces with the encouragement, “Keep asking and it’ll happen someday,” foreshadowing Max’s secret to step one, “Get a puppy”: Ask a lot. He also flawlessly reasons that while dogs might be lots of work, so is “picking up your room. And washing behind your ears.” While he ultimately realizes—after midnight wake-up calls, indoor potty accidents, and more—that dogs are a lot of work, they’re also “A lot of cute. A lot of cuddle. A lot of love”—which gives him an idea for the perfect name for his own puppy: “Alotta.” With clever inclusions throughout, including witty observations from Max’s grandma, who dryly observes that Max’s dog will think her name is “NoNoNo” since that’s all Max tells her, McAnulty creates an endearing story, with a little instructive commentary, for puppy lovers, especially those, like apparently her own nieces, wishing for one of their own. Hocking’s gouache and colored pencil illustrations are bright and playful, skillfully emphasizing both the work and the delight that a beloved pet can bring.

What Kind of Book is Max Explains Everything: Puppy Expert

Stacy McAnulty is the author of several picture books, includingExcellent Ed, illustrated by Julia Sarcone-Roach, and Beautiful, illustrated by Joanne Lew-Vriethoff. She lives in North Carolina with her husband, three children, and two dogs.

Deborah Hocking is an illustrator who lives in Portland, Oregon. For six years, she worked as a cook and gardener at a château in France, but now she has the incredible privilege of spending her days drawing for children, chasing magic. She is the illustrator of the nonfiction picture book Build, Beaver, Build! Life at the Longest Beaver Dam. The Great Henry Hopendower is her second picture book.

Book Dedication
For my sweet, spunky Little Lu... for your joyful, exuberant soul and wild, loving heart. Every day is brighter becasue of you.

What Has Stacy McAnulty Said About This Book

Nothing yet! You should let Stacy McAnulty know that you want to hear from them about their book.

What Has Deborah Hocking Said About This Book

Nothing yet! You should let Deborah Hocking know that you want to hear from them about their book.

Discover All the Books in the Max Explains Everything Series