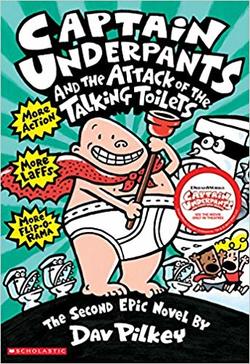 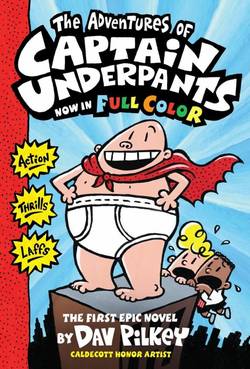 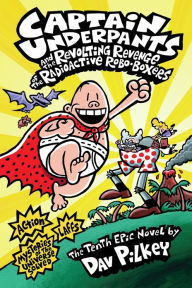 Who Wrote The Captain Underpants Books

When Dav Pilkey was a kid, he was diagnosed with ADHD and dyslexia. Dav was so disruptive in class that his teachers made him sit out in the hallway every day. Luckily, Dav loved to draw and make up stories. He spent his time in the hallway creating his own original comic books–the very first adventures of Dog Man and Captain Underpants. In college, Dav met a teacher who encouraged him to illustrate and write. He won a national competition in 1986 and the prize was the publication of his first book, <i>World War Won</i>. He made many other books before being awarded the 1998 California Young Reader Medal for <i>Dog Breath</i>, which was published in 1994, and in 1997 he won the Caldecott Honor for <i>The Paperboy</i>. <i>The Adventures of Super Diaper Baby</i>, published in 2002, was the first complete graphic novel spin-off from the Captain Underpants series and appeared at #6 on the <i>USA Today</i> bestseller list for all books, both adult and children’s, and was also a <i>New York Times</i> bestseller. It was followed by <i>The Adventures of Ook and Gluk: Kung Fu Cavemen from the Future</i> and <i>Super Diaper Baby 2: The Invasion of the Potty Snatchers</i>, both <i>USA Today</i> bestsellers. The unconventional style of these graphic novels is intended to encourage uninhibited creativity in kids. His stories are semi-autobiographical and explore universal themes that celebrate friendship, tolerance, and the triumph of the good-hearted. Dav loves to kayak in the Pacific Northwest with his wife. 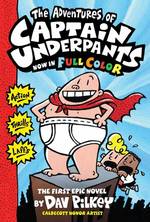 When George and Harold hypnotize their principal into thinking that he is the superhero Captain Underpants, he leads them to the lair of the nefarious Dr. Diaper, where they must defeat his evil robot henchmen. 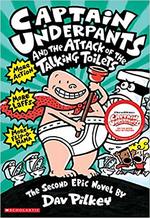 George and Harold are usually responsible kids – whenever anything bad happens, George and Harold are usually responsible! This time, their latest prank backfires, and they accidentally invent an army of terrifying talking toilets. Luckily, they know a superhero with enough snap in his waistband to save the day! This looks like another job for the amazing Captain Underpants!

Professor Pippy P. Poopypants takes over science class at Jerome Horwitz Elementary in the fourth book in this #1 New York Times bestselling series by Dav Pilkey, the creator of Dog Man!George and Harold are fourth-grade buddies with a penchant for practical jokes. When the boys’ latest prank drives their science teacher over the edge, their clueless principal, Mr. Krupp, quickly hires a replacement: Professor Pippy P. Poopypants. Of course, George and Harold can’t resist making fun of the Professor’s silly name. But then the Professor retaliates by forcing everyone in town to change their own names to be equally silly, with colossal consequences! 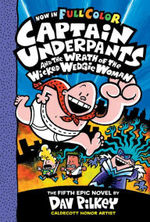 George and Harold accidentally create a monster in the fifth book in this #1 New York Times bestselling series by Dav Pilkey, the creator of Dog Man!George and Harold are always good at using their imaginations, and that drives their mean homeroom teacher, Ms. Ribble, crazy! But this time, they’ve come up with much more than a silly prank… With her horrendous hairdo and two rabid robots, Wedgie Woman is well on her way to world domination, and only the Waistband Warrior can stop her! 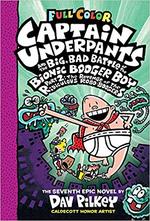 Bionic boogers return in the seventh book in this #1 New York Times bestselling series by Dav Pilkey, the creator of Dog Man!

George and Harold thought they were beyond boogers. Their new pet, Sulu the Bionic Hamster, had defeated the Bionic Booger Boy, and through the wonders of science, Melvin Sneedly had been brought back to normal (well, almost normal). It looked like their last adventure was actually going to have a happy ending… except for one thing (well, three things) – the Ridiculous Robo-Boogers. Now George, Harold, and their buddies are on the run – with the Robo-Boogers in hot, gooey pursuit! Will the boys get away from these gross globs, or will Sulu have to save the day again? 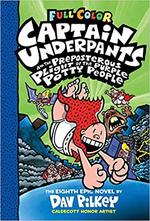 George and Harold’s time-traveling Purple Potty lands them in a crazy place in the eighth book in this #1 New York Times bestselling series by Dav Pilkey, the creator of Dog Man!

The teachers are nice, the cafeteria serves delicious food, and the school principal, Mr. Krupp, thinks George and Harold are hilarious. Something is very, very wrong – and it gets even wronger when the boys’ pet pterodactyl, Crackers, and Sulu the Bionic Hamster are captured by George and Harold’s evil-twin look-alikes. Now George and Harold must face their greatest foes yet: THEMSELVES! Can they handle this mess on their own, or will they need Captain Underpants to swoop in and save the day? 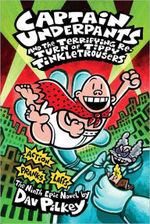 When we last saw George and Harold, they were headed to jail for the rest of their lives. What could be worse? How about being pulled from prison by a time-traveling tyrant named Tippy Tinkletrousers?!!? Now the boys are taking a trip back in time to the carefree days of kindergarten, when the scariest thing they had to face was not evil mad scientists or alien cafeteria ladies but a sixth-grade bully named Kipper Krupp, the nephew of their clueless school principal. And because George and Harold don’t invent Captain Underpants until they’re in fourth grade, the clever kindergartners are on their own. Will their brains be enough to beat the bully?!!? 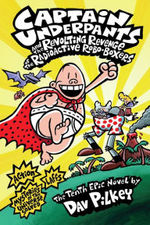 When we last saw our heroes, George and Harold, they had been turned into evil zombie nerds doomed to roam a devastated, postapocalyptic planet for all eternity. But why, you might ask, didn’t the amazing Captain Underpants save the boys from this frightening fate? Because Tippy Tinkletrousers and his time-traveling hijinks prevented George and Harold from creating Captain Underpants in the first place! Now, having changed the course of human history forever, they’ll have to figure out a way to CHANGE IT BACK! 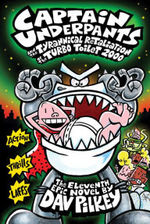 Just when you thought it was safe to flush, the Turbo Toilet 2000 strikes back! The carnivorous commode known for devouring everything in its path has built up a real appetite… for REVENGE! Luckily, the fate of humanity is once again in the hands of George and Harold and their annoying nemesis Melvin Sneedly. Will Wedgie Power prevail? Or will the amazing Captain Underpants be flushed away forever? 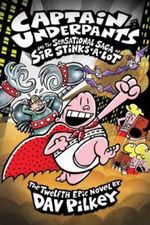 There’s something rotten in the state of Ohio, and it’s smellier than a pile of putrid gym socks! Steer clear – it’s Sir Stinks-A-Lot!

George and Harold, and their doubles, Yesterday George and Yesterday Harold, have a good thing going. Two of them go to school, while the other two hide in the tree house and play video games all day – then they switch! But when their malicious gym teacher, Mr. Meaner, creates a method of mind-control that turns their fellow students into attentive, obedient, perfect children, the future of all humanity will be in their hands!