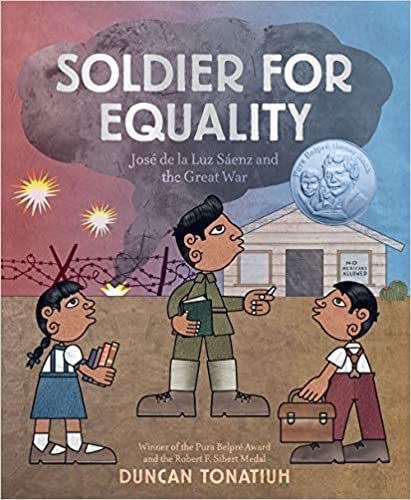 Goodreads4.1 / 5
The Definitive Guide to

Written and illustrated by Duncan Tonatiuh
Published by Abrams Books for Young Readers
Buy on Bookshop.orgBuy on Amazon
Prices as of Jul 23

Award-winning author Duncan Tonatiuh brings to life the story of a Mexican-American war hero Jos. de la Luz S.enz (1888-1953)–or Luz–believed in fighting for what was right. Although he was born in the United States, he and his family experienced prejudice because of their Mexican heritage. When World War I broke out, Luz volunteered to join the fight. Because of his ability to quickly learn languages, he became part of the Intelligence Office in Europe. However, despite his hard work and intellect, Luz often didn’t receive credit for his contributions. Upon his return to the US, he joined other Mexican-Americans whom he had met in the army to fight for equality. His contribution, along with others, ultimately led to the creation of the League of United Latin American Citizens (LULAC), which is the oldest Latino civil rights organization. Soldier for Equality is based in part on Luz’s diary during the war. It includes a biography of Luz’s later years, an author’s note, a timeline, a bibliography, and an index.

What Kind of Book is Soldier for Equality: José de la Luz Sáenz and the Great War

Duncan Tonatiuh was born in Mexico City and grew up in San Miguel de Allende. His books have received many awards over the years. He currently lives in San Miguel with his wife and children but travels to the US often.

Awards Given to This Book

What Has Duncan Tonatiuh Said About This Book

Nothing yet! You should let Duncan Tonatiuh know that you want to hear from them about their book.