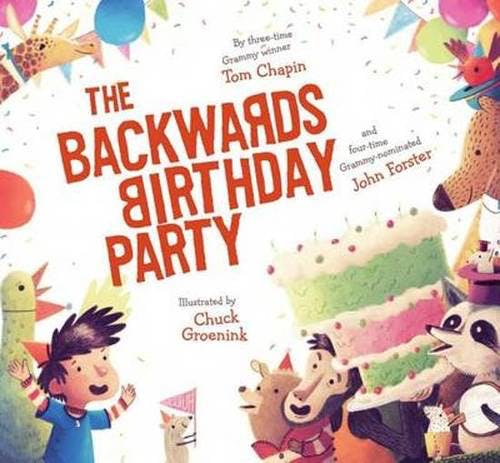 Written by Tom Chapin and John Forster & illustrated by Chuck Groenink
Published by Atheneum Books for Young Readers
Buy on Bookshop.orgBuy on Amazon
Prices as of Jun 19

Have a happy birthday—the backwards way! Full of fun and based on the hit song from Tom Chapin and John Forster, this is a celebratory birthday bash like no other. Put your clothes on inside out, heat up the ice cream, and hang on to your party hats—because everything’s out of whack at the backwards birthday party! From beloved, three-time Grammy-winning singer-songwriter Tom Chapin, four-time Grammy-nominated singer-songwriter John Forster, and with stunning illustrations from Chuck Groenink comes the zaniest birthday party you’ll ever attend.

What Kind of Book is The Backwards Birthday Party

I'm not always a fan of songs as books, but I think this read is very fun even without the musical element. It will make little readers want a backwards birthday party (or should I say, "the partyday birthwards back) and has fun, enjoyable illustrations.

Tom Chapin has entertained, amused, and enlightened audiences of all ages for more than forty years and through twenty-seven CDs, eight Grammy nominations, three Grammy awards, and thousands of live performances. A pioneer in the field of children’s music, he is also a respected singer-songwriter and a strong advocate for the arts in education. Tom lives in Piermont, New York. Find out more at TomChapin.com.

John Forster is a singer-songwriter, playwright, and humorist whose acclaimed output includes musicals on and off Broadway, Grammy-nominated recordings, humor books, and many delightful projects for children, including the perennial stage musical How to Eat Like a Child and a dozen albums with Tom Chapin. John’s comedy CDs include Entering Marion, Helium, and Broadsides, a duet album with Tom featuring their satire for NPR. John lives in South Nyack, New York. For more information visit JohnForster.com.

Chuck Groenink hails from an overgrown village among the peat bogs in the north of the Netherlands, where he spent his formative years climbing trees, drawing, reading, and cycling. He’s a history buff who attended the ArtEZ Academy of Art &amp;amp;amp; Design in Kampen and now lives in Kinderhook, NY, with his wife, dog, and two cats. Look for him at www.chuckgroenink.com.

What Has Tom Chapin Said About This Book

Nothing yet! You should let Tom Chapin know that you want to hear from them about their book.

What Has John Forster Said About This Book

Nothing yet! You should let John Forster know that you want to hear from them about their book.

What Has Chuck Groenink Said About This Book

Nothing yet! You should let Chuck Groenink know that you want to hear from them about their book.