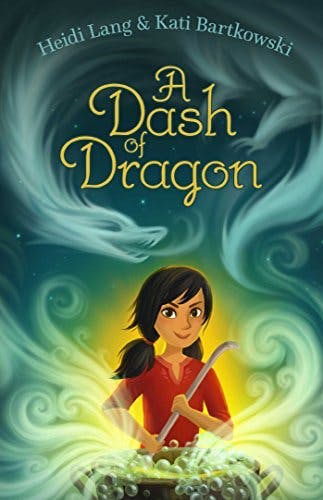 A Dash of Dragon

Written by Heidi Lang and Kati Bartkowski
Book #1 in the Mystic Cooking Chronicles Series
Published by Aladdin Books
Buy on Bookshop.orgBuy on Amazon
Prices as of Aug 9

What's A Dash of Dragon About

A thirteen-year-old master chef has a lot to prove as she tries to run a five-star restaurant, cook the perfect dragon cuisine, repay a greedy loan shark, and outsmart the Elven mafia in this entertaining novel that combines all of the best ingredients—fantasy, humor, adventure, action, cute boys, and a feisty heroine! Lailu Loganberry is an expert at hunting dangerous beasts. And she’s even better at cooking them. For years Lailu has trained to be the best chef in the city. Her specialty? Monster cuisine. When her mentor agrees to open a new restaurant with Lailu as the head chef, she’s never been more excited. But her celebration is cut short when she discovers that her mentor borrowed money from Mr. Boss, a vicious loan shark. If they can’t pay him back, Lailu will not only lose her restaurant—she’ll have to cook for Mr. Boss for the rest of her life. As Lailu scrambles to raise the money in time, she becomes trapped in a deadly conflict between the king’s cold-blooded assassin, the terrifying elf mafia, and Mr. Boss’ ruthless crew. Worst of all, her only hope in outsmarting Mr. Boss lies with the one person she hates—Greg, the most obnoxious boy in school and her rival in the restaurant business. But like Lailu always says, if you can’t stand the heat, stay out of the kitchen. And she’s determined to succeed, no matter the cost!

What Kind of Book is A Dash of Dragon

Book Lists That Include A Dash of Dragon

Heidi Lang managed to stumble upon the two best jobs in the world: writing for kids and walking dogs. If she’s not out on the trails surrounded by wagging tails and puppy kisses, she’s probably hunched over her laptop working on her next book. She lives in northern California with her husband and two adventure-loving dogs, and she is the coauthor of A Dash of Dragon and A Hint of Hydra. Find her on Twitter @HidLang, or visit the website she shares with her writing partner at HeidiandKatiWrite.com

Kati Bartkowski was originally drawn to illustration before she got swept up in the world of words. Nowadays she’s a fan of creating fantastical creatures and feisty heroines in both mediums. If she’s not reading, writing, or drawing, she’s probably chasing after her high energy little girl. She lives in northern California and is the coauthor of A Dash of Dragon and A Hint of Hydra. Find her on Twitter @KTBartkowski, or visit the website she shares with her writing partner at HeidiandKatiWrite.com

What Has Heidi Lang Said About This Book

Nothing yet! You should let Heidi Lang know that you want to hear from them about their book.

What Has Kati Bartkowski Said About This Book

Nothing yet! You should let Kati Bartkowski know that you want to hear from them about their book.

Discover All the Books in the Mystic Cooking Chronicles Series