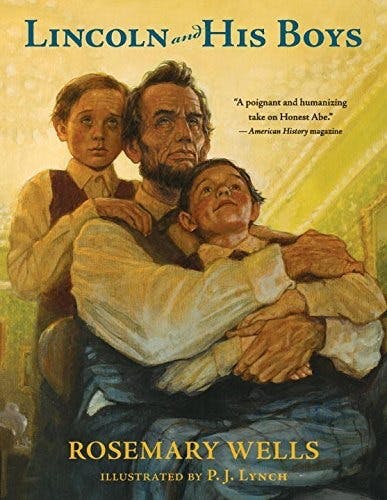 Goodreads4.1 / 5
The Definitive Guide to

Lincoln and His Boys

Written by Rosemary Wells & illustrated by P.J. Lynch
Published by Candlewick Press
Buy on Bookshop.orgBuy on Amazon
Prices as of Jul 26

Historians claim him as one of America’s most revered presidents. But to his rambunctious sons, Abraham Lincoln was above all a playful and loving father. Here is Lincoln as seen by two of his boys: Willie, thrilled to be on his first train trip when Lincoln was deciding to run for president; Willie and Tad barging into Cabinet meetings to lift Lincoln’s spirits in the early days of the Civil War, Tad accompanying him to Richmond just after the South’s defeat. With the war raging and the Union under siege, we see history unfolding through Willie’s eyes and then through Tad’s — and we see Lincoln rising above his own inborn sadness and personal tragedy through his devotion to his sons. With evocative and engaging illustrations by P.J. Lynch, Rosemary Wells offers a carefully researched biography that gives us a Lincoln not frozen in time but accessible and utterly real. Back matter includes an author’s note.

What Kind of Book is Lincoln and His Boys

Rosemary Wells’s career as an author and illustrator spans more than thirty years and 120 books. She has won numerous awards and has given readers such unforgettable characters as Max and Ruby, Noisy Nora, and Yoko. She lives in Greenwich, Connecticut. rosemarywells.com

P J Lynch (Illustrator) P. J. Lynch was born in Belfast in 1962, the youngest of five children. He studied illustration at Brighton College of Art (where one of his tutors was Raymond Briggs). He has won numerous prizes, including the Mother Goose Award and the Kate Greenaway Award. He now lives in Dublin.

What Has Rosemary Wells Said About This Book

Nothing yet! You should let Rosemary Wells know that you want to hear from them about their book.

What Has P.J. Lynch Said About This Book

Nothing yet! You should let P.J. Lynch know that you want to hear from them about their book.