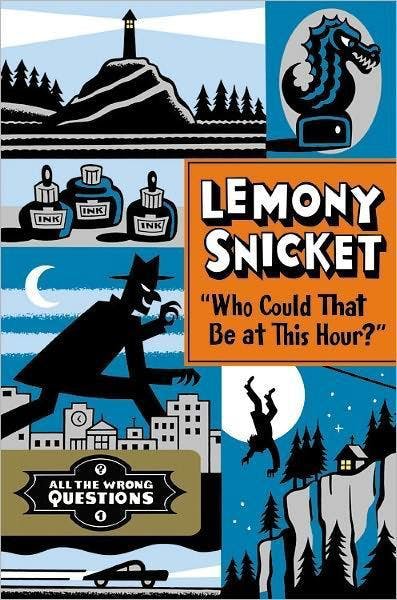 "Who Could That Be at This Hour?"

Written by Lemony Snicket & illustrated by Seth
Published by Little, Brown Books for Young Readers
Buy on Bookshop.orgBuy on Amazon
Prices as of Sep 17

The first new series by Lemony Snicket since his global phenomenon, A Series of Unfortunate Events. In a fading town, far from anyone he knew or trusted, a young Lemony Snicket began his apprenticeship in an organization nobody knows about. He began asking questions that shouldn’t have been on his mind. Now he has written an account that should not be published, in four volumes that shouldn’t be read. This is the first volume. Lemony Snicket has sold over 60 million copies worldwide and has been translated into 39 languages. His books have been made into a Hollywood movie starring Jim Carrey and in this new series, fans of his best-selling books, young and old, can dive back into the gothic darkness of his murky but humorous world.

What Kind of Book is "Who Could That Be at This Hour?"

You don't need to be a fan of Lemony Snicket's "A Series of Unfortunate Events" series to enjoy this new series, but it definitely helps. The "All the Wrong Questions" series has the same tragically hilarious tone and the same cryptic, confusing style, but new characters and situations. There are, every once in a while, Easter egg-ish references that will be familiar to "Unfortunate Events" readers, but this series can stand on its own. It was fun. I don't think it's as great as his earlier series, but it's still worth reading if you like Snicket's style.

Lemony Snicket is the author of the thirteen volumes in A Series of Unfortunate Events; several picture books, including The Dark; and the books collectively titled All the Wrong Questions.

Seth has portrayed suspicious circumstances and shady characters in much of his work. He is a multi-award-winning cartoonist, author, and artist, whose works include Palookaville, Clyde Fans, and The Great Northern Brotherhood of Canadian Cartoonists.

What Has Lemony Snicket Said About This Book

Nothing yet! You should let Lemony Snicket know that you want to hear from them about their book.

What Has Seth Said About This Book

Nothing yet! You should let Seth know that you want to hear from them about their book.